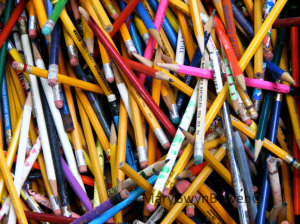 “People need to know their life is worthwhile.”  Barbara Esrig

On a rainy evening, coming back from seeing a patient, Barbara Esrig , a psychiatric homecare nurse,at the time came face to face with an oncoming car which was trying to pass four or five other cars when they wouldn’t let him back in the lane. The head-on collision resulted in an accident injuring her so badly she was deemed a fatality at the scene.  Barbara survived with 164 broken bones and paralyzed vocal cords.  She attributes much of her amazing recovery to not only a remarkable staff of surgeons and medical staff but equally to her many friends who were both traditional and non-traditional medical people, and some friends who happened to be artists in the Shands Arts in Medicine (AIM) program (now called UFHealth.Arts in Medicine). 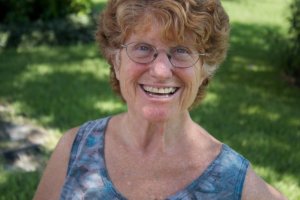 Both arms and both legs broken, on a respirator with only a pointing board for communication, Barbara’s hospital room at Alachua General Hospital became the place to be.  People decorated every inch of her room with art, including the IV poles.  Members of the AIM program, still in its infancy at the time, came by regularly to sing to her.  As Barbara describes it, her room was transformed into an “amazing healing environment.”  Word spread and soon doctors, nurses and others were hanging out in Barbara’s room.  Barbara says, “As bad as I was, the room was a really positive place.”

Unable to speak above a whisper for two years and in a wheelchair for three, Barbara came to the realization at the age of 50, that she would never be a nurse again.  Barbara had been writing since the age of ten and had a degree in Cultural Anthropology as well as a nursing degree.  During her recovery, Barbara turned back to her first love of writing.  Writing  and listening to people’s stories became her sustenance throughout her long recovery.

While she was recovering, Shands Hospital acquired Alachua General Hospital where Barbara had been and where she was introduced to the magic of the Arts in Medicine program.  Lauren Arce, then Office Manager for the AIM program called Barbara and asked her to come to their meeting.  Lauren asked Barbara to bring some of her writings to share with the others in the program.  After that first meeting, Barbara was asked to join the AIM program as a writer at Alachua General Hospital.  She did and a new career was born.

Barbara says she sees the world in stories and loves to listen to the stories of people’s lives.  She began to visit patients in their room to hear their stories because “it’s important for them to remember who they are when they’re not in a hospital gown.”  According to Barbara, “People have amazing stories.  It’s like hitchhiking.  You never know who you’ll pick up.”  “Disguised in a hospital gown may be a scientist, a maker of moonshine, a CEO, you never know.”  Barbara says over the years she has heard stories of survival, escape from war torn countries, ancestors arrival in the new country, childhood customs, traditional foods and more.  As an avid cook, Barbara particularly loves to hear the stories of family recipes and special holiday foods, occasionally going home to recreate the foods and bring them back to the patient.

From nurse to writer of oral histories, a life -changing event led Barbara Esrig to a new life direction.  Today, she takes the oral histories of patients at UF Health/Shands Hospital and transcribes them in the patient’s voice with no editing.  She provides both a written copy and a CD recording to the patient or family.  Barbara points out that she purposely does not edit.  When an unedited story is provided to the patient’s family, they recognize the patient’s voice and not the edited voice of the listener, an important difference distinguishing an oral history from a biography.

Many hospital patients often feel reduced to “The Heart” in room 2412, or “the diabetic in room 3400.”  Oral histories let patients, families and hospital staff see more than a disease.  Oral histories show the amazing person rather than the diagnosis.  Barbara Esrig is there to tell the world about as many amazing people as she can on a day-to-day basis.  She says, “you go along in a certain direction in your life, then something suddenly happens and all that changes.”  She says fifteen years ago she,”came in through the back door as a patient,” to the Arts in Medicine program.  From life-changing event to a new life, Barbara Esrig now supports others through their life changing events by giving them a voice. Barbara assists patients to tell others who they are as a person and not as a disease.

Read more about Barbara’s wonderful work at the following link:

*Thanks to Barbara for her contributions to this article!