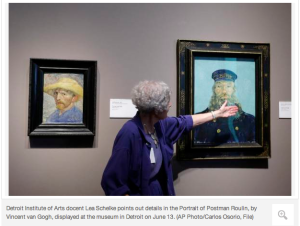 The Daily Beast is reporting that the city council of bankrupt Detroit is planning on giving 45 million dollars to billionaire (2.7 billion net worth) Michael Ilitch so he can build his Detroit Red Wings a new super duper stadium.  Never mind that the city is flat broke, Mr. Ilitch must have a new stadium for his team and can’t be bothered to actually pay for it himself with his own money or from the profits of the team.  Where does this picture leave the pictures at the Detroit Institute of Arts?

Sadly, it’s clear how the city has fallen so far down.  When a priceless collection of art may have to be sold to pay the bills the city council doesn’t care to pay while these same council members take what little money the city has left to give to a billionaire for a sports team that can easily pay for itself, just defies comprehension.

Meanwhile, Sean Higgins of the Washington Examiner is reporting that Randi Weingarten, president of the American Federation of Teachers has spoken out to oppose the sale of the art.  Weingarten says the art collection will be a boon to the city once is recovers.  One wonders how the city can recover with its current city council?  Hopefully, more people will follow Weingarten’s lead and speak out in support of this wonderful collection before it’s too late.

It seems the hoped for sound of the hoof beats of a mighty steed galloping to rescue the art collection of the Detroit Institute of Arts may eventually be heard.  However, they won’t actually be coming to save the art. They will be trampling it on the way to see the hockey game in its fancy new digs.