The Bald Eagle is a majestic symbol of strength and courage in many cultures. 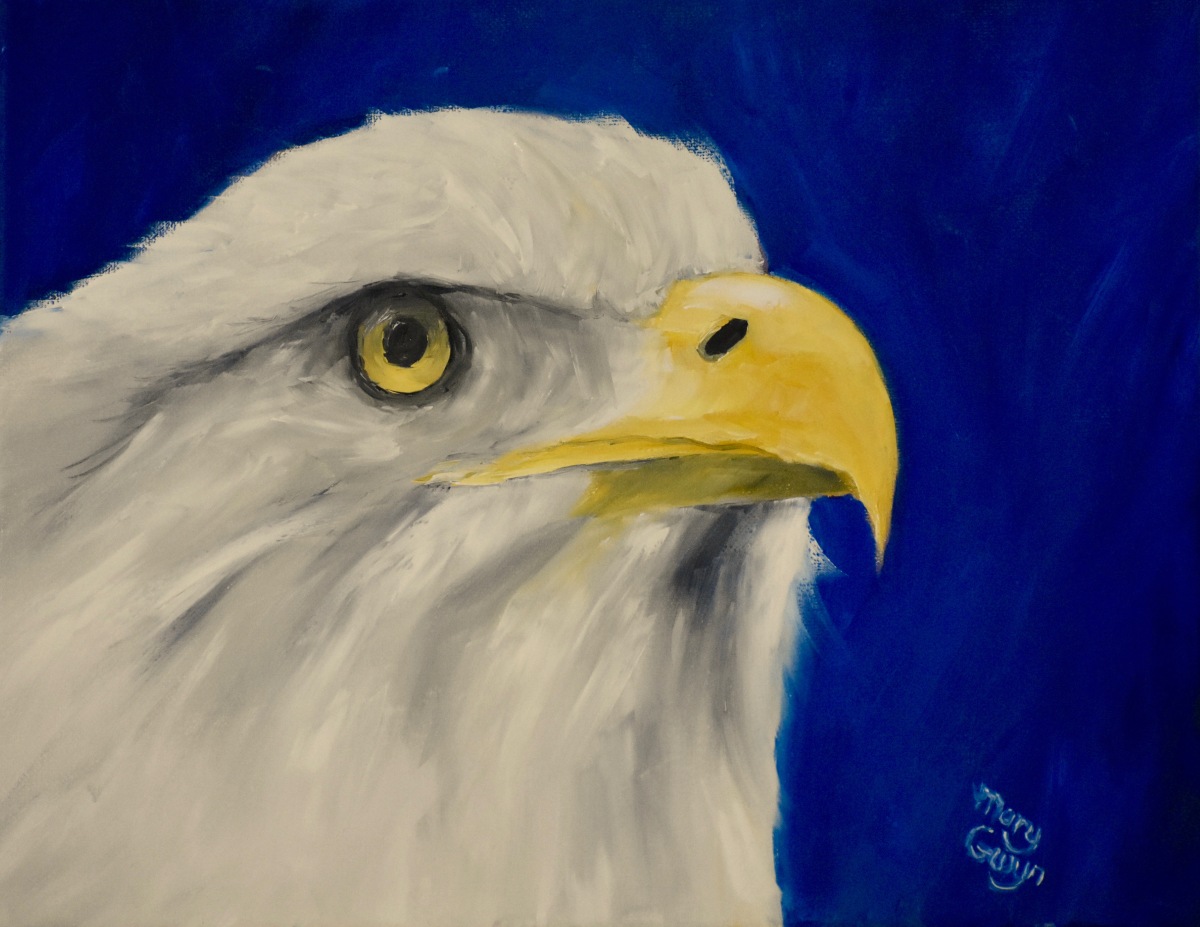 High on a ridge overlooking the valley, the Guardian is perched in the top of the old oak tree. From his vantage point, he can see the goings on down in the valley while at the same time keeping up with the fishing situation on the backside of the ridge where the river flows into the lake. Eliot Eagle has long assumed the role of Guardian of the valley.  From his perch, he is on the look out for predators such as the Hawks who are always disrupting the serenity of the little dwellers of the valley, specifically the Chattering Chickadees, as they insist upon grouping together in the old pine tree.  The Chickadees, though they are always on the look out, tend to feel safer when they know Eliot is keeping his eagle eyes out for the little birdies and those who would stir up trouble.

As the subject of many of her stories, Caroljean Chickadee loves to expand on the mystery surrounding Elliot Eagle and the other eagles nesting around the great lake in the winter. According to Chickadee legend, the great bald eagles are direct messengers between God and humans. Of course, Chickadee legend was derived from sources like One Green Planet and American Cowboy Chronicles. Caroljean Chickadee is known for her ability to weave tales around facts she has gleaned from various sources on the internet. One of her tales had Elliott Eagle taking part in an ancient Greek legend. Another had him as the star of a cave painting over 130,000 years ago. Elliott never blinks at these stories. Nor does he refute them. He just remains in the top of the old oak tree watching over the valley.

Next time you are privileged to catch a glimpse of Elliot or one of his majestic cousins, Chickadee legend will have you staring in awe and wondering if the one you are looking at is related to those eagles featured as the star of an ancient cave painting. Or maybe the one you see is descended from the eagle the Aztecs believed fought a panther and won to be the sun god.  It’s possible your eagle is related to a past honorary guest at festivities celebrated by any number of cultures from most Native American tribes to Irish folklore.  You can count on Caroljean Chickadee  to share the latest Eagle story.  But don’t ask Elliot.  He’ll never tell.

The Eagles appearing in these two paintings were photographed at Reelfoot Lake State Park in Tennessee at the Reelfoot National Wildlife Refuge in West Tennessee and on Kentucky Lake on the edge of the Land Between the Lakes National Wildlife Refuge. Both Refuges have many events for checking out the Bald Eagle populations in the parks. The image used for the featured painting came from a bald eagle recently cared for at the Reelfoot Lake Refuge. After healing, the eagle was released back into the wild.

One thought on “The Guardian Eagle”