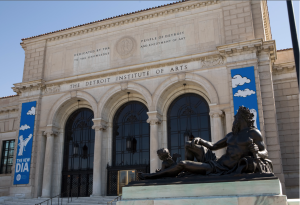 “Without art, the crudeness of reality would make the world unbearable.” George Bernard Shaw (from Brainyquote)

The Detroit Free Press and other news organizations are reporting that a group of foundations have stepped up to provide funding to save the art and the pensions of the city of Detroit and the Detroit Institute of Arts. As the city spiraled into bankruptcy, the DIA’s art was pitted against the lack of funding for the pensions of the city’s retirees. A battle had ensued suggesting the mean old art people were in favor of starving the pensioners in order to save the art. For the art it was an unwinnable war. A precious collection was in danger of being sold to the highest bidder to fund the pensions of the city’s retirees. No one wanted to see retirees starve and many art lovers had acknowledged that the art was the likely loser.

As good as this sounds, it still may not be enough to rescue both the art and the pensions but it is great news. There remains much to be worked out in court. Time will tell. Last week what looked hopeless is now hopeful. It seems the mighty steed of rescue may be riding in after all. No word yet as to whether anybody has discussed what got the city into this mess in the first place. That bit of enlightenment has yet to dawn on anybody.

Photographs shown are from the Detroit Institute of Arts downloadable images page on the website. For more images go (here). Insert photo is the North Wall by Diego Rivera (1932-1933), fresco.

6 thoughts on “The Appearance of Rescue”