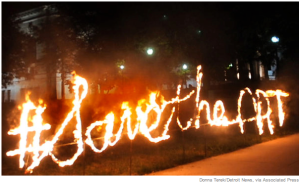 “He who knows when he can fight and when he cannot, is victorious.” Sun Tzu (from Brainyquote)

For years the museum carries on its function of sharing great art with the world, opening its doors so young and old can enjoy the treasures it holds.  Its sole purpose is to give the joy and beauty of art to others.  The museum carried on quietly without engaging in politics or giving its opinion.  It asked only to continue with its purpose.  Without warning it was suddenly thrust into the limelight and held hostage by the very politics it chose not to take part in.

Suddenly this museum is fighting to stay out of the raging battle for the fiscal salvage of the bankrupt city.  The PR war being waged basically says that art must be sacrificed to pay the pensions of the city’s retirees.  Nothing is being said about how the pensions got in this mess in the first place.  It wasn’t the art that did it but the art will be made to pay the price.

Lee Rosenbaum, author of the CultureGrrl at Arts Journal blogs, was interviewed by NPR on Christmas day about this subject.  Follow the link for a wonderful interview.  During the interview, there were several attempts by the interviewer to engage Rosenbaum in the game of pitting the art against the pensioners.  Rosenbaum’s response on her blog was, “Its wrong to put this as an either-or between pensions and art.  There are so many other players here.  It makes it sound like this mean museum is holding onto its art while people are starving.  Its not that.”  It may not be that but the museum will still likely lose this war.

As each day goes by it is looking more and more likely that much if not all of the fabulous treasured art of the Detroit Institute of Arts will be sold to pay for the fiscal hole of the city of Detroit.  Art has no hope of winning a PR war with pensioners whether or not the art had anything to do with the state of the pensions. This war is best not fought at all.  Art has become another victim in this sad tragedy.  We can hope for a victory by not getting sucked in to this battle.   Perhaps the art will end up in a place where it can continue its role of bringing joy to others.  That would be a victorious ending to this tragic war.

4 thoughts on “Art as Tragic Victim”