“Most inner-oriented artists share a common characteristic, a certain quality of obsession.”  Kenneth Coutts-Smith  (from The Painter’s Keys)

Much has been written and will continue to be written about the strange story of Cornelius Gurlitt and the hoard of some 1400 works of priceless art in his Munich apartment.  How much of the art legally belongs to Gurlitt will be sorted out by the German authorities, eventually.  Until that time, the man has finally come out of hiding to speak of his obsession.  Gurlitt has given an extensive interview to Der Spiegel. 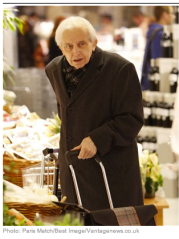 For those hoping to make sense of the story of the man, the interview won’t make that happen.  If anything, the interview of Mr. Gurlitt only makes the story stranger.  Gurlitt lived for and with his art and only his art.  He has no friends and very little contact with any relatives.  According to the article, he loves his art as if the works are his children.  He is devastated by the confiscation of his art.  He kept a collection of 25 drawings in a suitcase, taking them out each night at bedtime to gaze at them.  For eighty years, Gurlitt has lived for his art.

What is it about art that can so totally consume a person as it appears to have done with Gurlitt?  Some will say it is a mental health issue.  That apparently occurred to the German authorities.  They sent a social worker to Gurlitt’s apartment to speak to him.  But Gurlitt’s behavior is really no more strange that the behavior of some of the artists whose work is in his collection.

The magnetism of art is a documentable phenomenon.  For some it is visual art.  For others it may be dance or theater, books, poetry or music.  Is Gurlitt any different than the “Mystery Man” who put three roses on the grave of Edgar Allen Poe on the anniversary of his birth every year for over twenty years?  Or of someone who pays 142 million dollars for a single work of art?  The artists themselves, some of them, can be equally obsessive in the creation of the art.  That doesn’t answer the question.  What is it that creates the magnetism?

Magnetism is not something learned in school or in a book.  It can’t be described in scientific terms.  It either happens or it doesn’t.  Some artists have it.  Others don’t.  It does not appear to be related to the skill or lack thereof, of the artist.  If magnetism can’t be learned, is it out of reach to those who are striving for it?  No.  Magnetism comes from the still, small inner voice.  Some may be better at listening than others.  The skill of listening should perhaps be cultivated vigorously.  Will following that inner voice lead to creating the kind of art that results in an obsession like Gurlitt’s?  Who knows!  But it is doubtful it will happen without it.

The Telegraph, CNN and the Daily Mail have more on the Gurlitt case at the links.