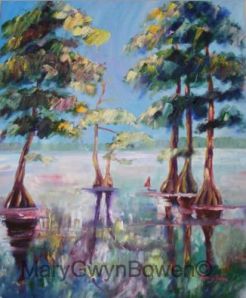 Gainsborough’s “The Blue Boy” relied on a newly discovered blue.  Picasso could not have managed his “Blue Period,” without this very unique blue paint.  Many artists look for ways to save money on supplies without compromising quality.  Such was the case with eighteenth century Berlin artist, Diesbach when he stumbled upon the ingredients for making a new blue paint later called Prussian Blue.

Blue was expensive for artists in the early seventeen hundreds.  Painters used very little blue in their works, reserving it for the most reverent religious depictions.  Diesbach was actually working on a mix for reds when his local chemist sold him iron sulfate and contaminated potash.  Oil made from animals was the contaminant. It was this potash that set up the chemical reaction that became Prussian blue.  It gained in popularity throughout the eighteenth and nineteenth centuries.  Winsor Newton began selling Prussian Blue in 1878.   The name derives from its use as the color of the uniforms of the Prussian Army in the early eighteenth century on.

Chemistry World gives a detailed description of the actual chemical reaction that creates Prussian Blue.  Since I barely muddled through college chemistry, I won’t attempt to describe the process and suggest following the link to Chemistry World for a fascinating account.  Their essay also outlines the use of Prussian Blue on patients with certain radioactive poisoning or thallium contamination.  Good to know if you are ever in that situation!

Prussian Blue’s name was changed by Crayola to Midnight Blue in the 1950’s because it was felt few would understand the name.  Prussian Blue continues to be a popular paint to many painters, myself included, though some complain that its light fastness might be lacking.  I exercise care when using Prussian Blue because of its ability to quickly overtake other colors. For some fun reading on Prussian Blue try Joshua Cohen’s “Thirty-six shades of Prussian Blue” (though not to be confused with a book of a similar title concerning grays!).  And if you would like to imitate those eighteenth century artists and make your own Prussian Blue, here is a YouTube demonstration by Dr. Mark Foreman: