The movie Catfish brought that word as a descriptive into the general language where it has found a place in the Urban Dictionary.  IMDb quotes the character, Vince Pierce from the movie as he describes the term:

“Vince Pierce: They used to tank cod from Alaska all the way to China. They’d keep them in vats in the ship. By the time the codfish reached China, the flesh was mush and tasteless. So this guy came up with the idea that if you put these cods in these big vats, put some catfish in with them and the catfish will keep the cod agile. And there are those people who are catfish in life. And they keep you on your toes. They keep you guessing, they keep you thinking, they keep you fresh. And I thank god for the catfish because we would be droll, boring and dull if we didn’t have somebody nipping at our fin.”

Slate magazine gives a more in-depth synopsis of the origin of the term but it took today’s world of social networking to bring the term to life as the subject of a movie by that name and a series on MTV.  It is well worth reading the article for deeper understanding.

Reading about the movie brought back to me an incident from years ago that still brings a smile at the memory.  While traveling through the beautiful Cotswold region of England, we encountered an elderly gentleman working hard at cultivating his status as “local character.”  He was sitting on a bench just outside the gates to the churchyard obviously waiting to waylay any tourists coming to view the historic church.  He called himself a catfish among the mackerel because, as he told us, he was a relative new comer to the village only having lived there twenty years.  As new -comer he was not able to be one of the local mackerel so he had relegated himself to nipping at their fins by ambushing tourists.  He went on to give us a detailed history of the town and the church.  I never forgot him or the village.

That village in the Cotswolds will always stand out to me because of a curmudgeonly Catfish who brought it to life for us by nipping at the fins of the mackerel.  As artists, isn’t our role to be catfish?

The Cotswold region of England with its thatched cottages, lush roses and lovely winding streets is a great place to look for artistic inspiration. 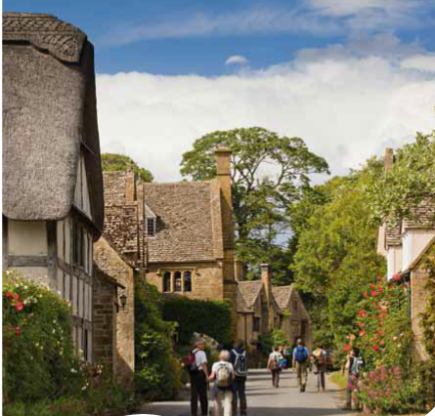 One thought on “A Catfish Among the Mackerel”